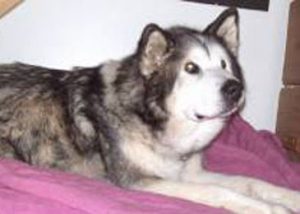 Luna was the first dog whose life was changed by Straw For Dogs.

Straw For Dogs began with an ad placed on Craig’s List offering doghouses and straw for dogs living outside. That ad was seen by a young man who contacted us about his aunt’s dog. His aunt allowed us access to her yard where we found a female dog in what appeared to be a hopeless situation―lying in a trash pile and almost unable to stand up.

But the situation wasn’t hopeless any longer. The dog’s caretaker agreed to relinquish the dog to us and a volunteer was willing to open her home to this dog. We took her to a veterinary emergency hospital where her condition brought tears to the eyes of the veterinarian. This elderly dog was malnourished, dehydrated, and suffering from severe arthritis.

This dog was thirteen years old. In thirteen years she had never been inside a home and had spent almost no time with people. But now she was to become Luna―named for the blue moon that occurred when she was rescued―and Luna spent her remaining time warm and safe and, most importantly, loved.